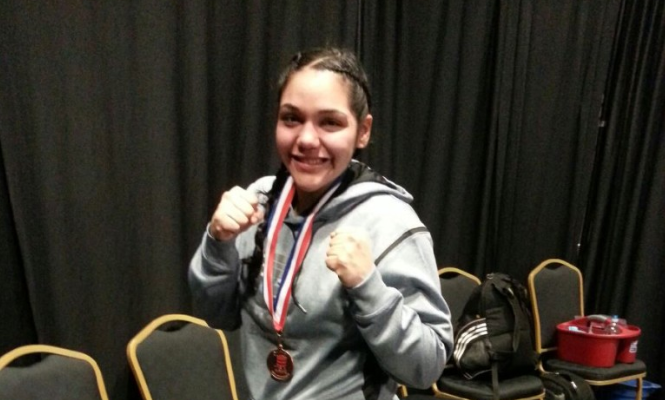 Krystal Correa is upper-cutting her way to Victory

Krystal Correa rolls her shoulders to the beat of a Beyoncé song as she steps before the crowd, pumped to begin the fight.

Stepping into one of the largest arenas she’s ever been in during her boxing career, she pays honor to her sport by tapping her yellow boxing gloves around the ring four times. For good luck, she does a quick fist bump to her coach and her teammates. Then she stares at her opponent.

Franchon Crews stands 5’8″ and towers over Correa with not only her height, but her eight years of experience.

The referee steps out and gives them the rules. Head up. Keep the fight clean. Correa hears him, but she only has one thing on her mind: to prove to Crews that “she is not a punk.”

The bell rings, and the fight of Correa’s life begins.

“People expect me to wear baggy sweats and look like the stereotypical ‘boxer’, but I’m just a regular girl,” laughs Correa as she enjoys her favorite garden salad from the campus cafeteria.

The nursing major and sophomore at Mercy College has been boxing for two years, and has recently returned with the bronze medal from her win against Crews at the 2014 U.S. Boxing Elite National Championship in Spokane, Washington.

The fight with Crews only lasted a minute and four seconds, due to safety reasons.

“I was so mad that they had to end the fight so early. During the fight, I became a slugger. It’s a term we use for saying that the opponent continually hits the person instead of moving around the ring, the way boxers are taught to fight.”

“Better safe than sorry, I guess.”

According to Teamusa.org, amateur boxing is enjoyed as a rich tradition of excellence in the United States since 1888. The sport has provided competitive opportunities for hundreds and thousands of young men and young women.

Currently rated fourth in the nation, Correa never imagined she would be where she is today. After coming to the Yonkers YMCA at 215 pounds, she has lost more than 60 pounds in a year. Through her weight loss, she discovered her love for boxing.

“Never in my wildest dreams did I expect for any of this to happen. My love for boxing is just a big part of who I am now.”

When she saw two of her friends compete in The New York Daily News Golden Gloves, an annual competition for amateur boxing in the United States, she immediately knew she wanted to compete. Although her friends and trainer were supportive about her decision to compete, her parents were hesitant.

“When I first told my parents I wanted to compete, they weren’t very supportive. But, this is something that I really wanted to do. I had never really enjoyed participating in any other sport than boxing. If it makes me happy, I’m going to do it. I promised them I would make them proud.”

The International Amateur Boxing Association was formed in 1946 and created an international body for amateur boxing. Throughout the sport’s development process, the U.S has been a world leader among nations in creating competitive opportunities, enhancing the sport’s image and making amateur boxing safer for all of its participants, according to Teamusa.org.

With her parents blessing, Correa began her rigorous training of becoming a competitive boxer. Despite the Rocky Balboa movies where Sylvester Stallone is jogging around town and punching raw, frozen meat in his training montage, Correa’s workout is a bit more realistic. And strenuous.

“I run five miles every day, along with jumping rope for 15 minutes, shadow boxing, sparring and calisthenics class from 5:30-9 p.m. I’m allowed to have two days off, but I try to train every day.”

Females are a large part of USA Boxing and the sport worldwide. They can compete in sanctioned amateur competition within the United States and internationally. Currently, there are approximately 3,000 female boxers that register with USA Boxing each year, according to Teamusa.org.

After winning her first match in a semi-finals fight in 2013, Correa kept winning and striving to be the best. She is now on her way to compete in The New York Daily News Golden Gloves, one of her biggest dreams. Correa knows that she wouldn’t be where she is today without the support of her family.

“We’re all very family oriented and really close to one another. Even some of my cousins want to start boxing.”

The Yonkers native has a very close relationship with her mother. When Correa’s mother had her first schizophrenic episode her junior year of high school, Correa knew she had to become the backbone her family needed to keep everything together.

“Managing schoolwork, boxing and taking care of a parent can be very stressful. But, seeing her in the hospital hurt so much. I’m going to be with her every step of the way. I’m her rock, and she’s my princess.”

Along with her boxing dreams, Correa also aspires to become a nurse. She enjoys helping people, and will lend a hand to whomever may need it. She also enjoys teaching the younger generation about boxing at the Yonkers YMCA. Spending time with them makes Correa feel like the YMCA is her second home.

“My gym is like a second home, and everyone there is my family. I love teaching the kids and spending time with them. We always support each other.”

Although her main focus is her schoolwork and becoming a nurse, she has high hopes of winning the Golden Gloves and one day competing in the Olympics.

“I don’t plan on making a future out of boxing, but turning pro and competing in the Olympics would be pretty cool.”

Correa is just going to keep boxing and doing what she loves, taking everything day by day. She only has one piece of advice for those who want to follow in her footsteps:

“It isn’t going to be easy. Every day will be a challenge. Don’t have any doubt in yourself, and continue to do what you love. Everything bad in your life doesn’t have to be the focus of you not striving to do your best.”