Now, we all know after seeing Back to the Future II, we couldn’t wait for the future to come and see if the movie was actually a foreshadow! There are a few that actually did come true, others that didn’t and some that are in the works. So, to celebrate the Back to the Future day, let’s take a look!

As Doc Brown once said…

Movie 2015: Marty has Nike sneakers with shoelaces that close and tighten by themselves.

Real 2015: In 2011, Nike produced 1,500 pairs of the “Nike MAG” shoe and sold them to benefit the Michael J. Fox Foundation, which benefits research into Parkinson’s disease, a condition that the actor who played Marty has. The shoes look exactly like the one’s in the movie but had no power laces, instead they were velcro.

Movie 2015: The jacket that Doc has for Marty is too big, but with the touch of a button, it fits. After he falls into the fountain, another button dries his jacket instantly.

Real 2015: We still have to go to the store to try on clothing to make sure they fit. And, when they get wet, we still need a dryer.

Movie 2015: Doc shows Marty a copy of U S A covered with headlines reading: “Slamball Playoffs Begin,” “Cubs Sweep Series In 5,” “Washington Prepares For Queen Diana’s Visit,” and “Cholesterol May Be Cancer Cure.”

Real 2015: When this movie came out, Slamball was not even a sport; it wasn’t founded until 2002 (Slamball is pretty much basketball but with trampolines). Princess Diana never became Queen, nor will she ever; she’s deceased. Cholesterol is not a cure for cancer! The World Series does not sweep in 5! 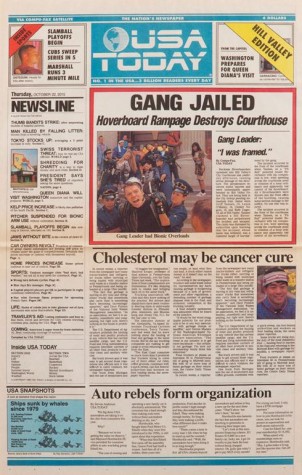 Movie 2015: As Marty’s looking around at the future, he gets frightened by a hologram shark that jumps out at him that’s promoting the movie, Jaws 19.

Real 2015: Now, we all know there is no Jaws 19, nor are we close to a Jaws 19, but Universal Pictures just released an online trailer for it as a joke to mark the Back to the Future day.

Movie 2015: When Marty’s in the ’80s Diner, his soft-drink order of Pepsi pops out of the restaurant table in seconds with a “Pepsi Perfect” logo on it.

Real 2015: Okay, so we actually don’t see this in diners, but Pepsi is actually selling limited-edition bottles of “Pepsi Perfect” to mark the Back to the Future day!

Movie 2015: While he’s in the 80’s Diner, Marty shows off his arcade gaming skills to the younger boys watching him. After he finishes, the boy questions, “You have to use your hands? That’s like a baby’s toy!”

Real 2015: Guess what? The boy was right! In 2015, we don’t have to use our hands to play games. We now have handless and wireless gaming that we all know as Xbox’s Kinect system.

Movie 2015: Marty rides one of these while he’s in the works of saving his son from Griff.

Real 2015: There’s actually a self-balancing hoverboard! It might not be an exact replica as Marty’s, and this one might have wheels, but it’s close enough!

Movie 2015: There’s a scene where a member of Hill Valley’s Preservation Society holds out a tablet for Marty to sign, electronically, to save the clock tower.

Real 2015: The tablet featured may be much clunkier than the tablets we have today, but the idea is still the same. We have the iPad where it’s something small and wireless that people can do cool things like play Candy Crush. Or save the clock tower!

Movie 2015:  When Marty comes to the future, the World Series is over; Cubs beat Miami!

Real 2015: The assumption that the World Series would be over by October 21 is wrong because that’s never happened yet. The one thing the movie did get right is that in 2015, Miami would have an MLB team – Miami Marlins. The Cubs haven’t won a World Series since 1908, but it looks like they may have a chance this year! The only exception: it won’t be a Cubs-Marlins series. It can actually never take place because they are both National Leagues. And the Mets knocked out the Cubs in the NLCS!

Movie 2015: When the cops find 1985 Jennifer, they know who she is my assessing her fingerprint. When they arrive at the McFly house, they use her thumbprint to access inside the house.

Real 2015: We actually have something similar to this in a sense on our smartphones. And, not only are they thumbprint recognition, but also, facial recognition, too!

Movie 2015: In Marty’s house of the future, a voice-activated, wall-mounted, flat screen TV shows six shows at once that alternates and puts them on hold when someone calls on the phone. The caller’s picture appears on the screen along with their name. This is what happens when Marty’s on the video call with his boss Needles.

Real 2015: TV sets are flat-screen and wall-mounted and they can show multiple images. Some cable systems offer on-screen caller IDs. We all know the multitasking capabilities, credit card scanners,  and FaceTime are on our smartphone’s, not the TV. And do we use Fax machines anymore?

Movie 2015: Future Marty’s mother opens up a tiny package of pizza and puts it in a Black&Decker Hydrator microwave looking object. When it goes off, the tiny sized product comes out an actual size pizza.

Movie 2015: The 2015 Marty is sitting with his family at the dinner table while they wear TV glasses and are preoccupied with it.

Real 2015: Okay, so we don’t wear TV glasses, but we do have Google glasses, that serves as a handsfree phone. And we all know we use our phones whenever we are eating with friends and family. Who knew that we’d really become the victim of out own technological advancements!

Movie 2015: When they first land in 2015, Doc tells Marty to pull his pockets out because that’s the way kids wear their pants; inside out. Also, when we see the 2015 Marty McFly, he and his coworkers on the video chat are wearing 2 ties.

Real 2015: We do not wear our pants inside out, or even out pockets out, but if we do, that’s because we’re just too lazy to put them the right side. And, 2 ties? Still haven’t seen that style yet. 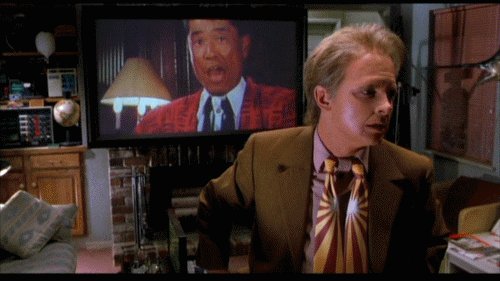 Okay, so the one major thing the movie got wrong was the idea of pay phones still being on every corner. What is a pay phone anyway??

Doc was wrong. Where we’re going, we still need roads. But, there might just come a day that we will see them!